Jasmine Fei Qu is an exchange student at Bowdoin College majoring in Government and Economics. Her summer internship with a Chinese Non-Government Organization (NGO) involved several projects. One had to do with waste pickers. Here is her account of that experience. 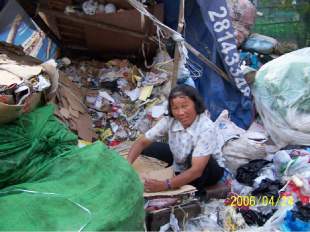 This past summer I worked with the Institute of Contemporary Observation (ICO), a China-based NGO in Shenzhen. I went to ICO because of its concern for migrant workers and its vision of empowering this underserved group. They are China’s cheap labor force, During the internship, I was mainly involved in ICO’s Waste Picker Project. Funded by the World Bank, it is a one-year project aiming to build a network among Shenzhen waste pickers. This network would allow waste pickers to help each other, enhance their capacity of self-protection, and provide them development opportunities.

Shenzhen is very close to Hong Kong and has been booming for the last twenty years. There are about 200,000 waste pickers there. Most come from the rural areas in Henan, Anhui, Hunan, Hubei. They are mostly middle aged or older and lack education and skills. They collect waste to make a living. They are usually homeless and must consume unsanitary food and drinking water, so they are vulnerable to injuries and diseases. They do not have access to urban welfare facilities because of the Chinese hukou household system. (Hukou refers to the residency system, which requires an individual to live in the area designated on his/her permit. Access to education and government services is available only to those who have hukou in that area.) Therefore, waste pickers’ children cannot go to school in Shenzhen. And the city management department often arrests them or destroys their dwellings because they are illegal residents. They endure the urban residents’ discrimination against them. In short, waste pickers are the most vulnerable and most needy segment of the Chinese labor force.

The ICO project started with getting to know waste pickers. Although they live among urban residents every day, no one is interested in knowing who they are, what they do and how they live. Lacking previous research, ICO had to start from scratch. We went to talk to the waste pickers on the street. At first, they were very suspicious about our motivation. However, after reading the description of our program and getting to know us for several weeks, some of them were willing to talk and work with us.

The two groups I worked with were very different. One was composed of people from the same hometown. They come to make extra money in summer and winter and go home to plant and harvest rice during spring and fall. For them, it is a job with a flexible schedule and fair pay (compared with their income at home).

The other group included people from all over China. Some were drug dealers, thieves, or criminals. Almost all have lost their ID cards. We never knew their real names and their true stories. Most have lost contact with their families. They are forced to be waste pickers. It is a way to earn money, to hide from the police, or just to go on with their hopeless lives.

We tried our best to be friends with them and move towards our goal: to build a network. However, the differences among waste pickers were so large that it was impossible to build one network to serve them all. It was extremely hard to keep in touch with some, since they always move around, and the people who we knew left their original group.

Waste pickers were also always suspicious. They tended to focus on what direct personal benefit ICO could bring to them, instead of how to cooperate with ICO and establish a beneficial network. Despite all the difficulties, we still tried to use our limited financial and human resources to make some progress.

[From the November 2006 CAFAM Newsletter]