The board members of CAFAM have been busy planning the 2017 Chinese New Year celebration—always our biggest and most exciting event of the year. But to pull it off, we need more hands on deck!

If you are interested in helping us make the Chinese New Year event a success, please let us know. If you can volunteer on the day of the event or help with planning and organizing a certain aspect of the event (from publicity to activities to food), we would love to hear from you. Baituo 拜託！拜托！

Please contact Cindy Han at cindyhan09@gmail.com if you would like to learn more or offer much-needed help!

A message from the school:

We are very happy to announce the opening of enrollment for our 20th year of the CAFAM Chinese School and we hope that you will be able to join us! We’ll have another fabulous year of art, dance, cooking, family, friends and fun!

We’ve had a little change in date due to the holiday spanning the first weekend in October. This year, school will run from Saturday, October 15 through Saturday, November 19. We’ll have a holiday break, meet once in December on Saturday the 3rd, break again and then resume classes Saturday, January 7 through Saturday, January 21. Chinese New Year dress rehearsal will be on January 28th and we are planning our big Chinese New Year Celebration for February 4, 2017! Let’s welcome the year of the ROOSTER!

We are also planning a special event for this spring … stay tuned for that and we’ll let everyone know the date as soon as plans are finalized.

Please take a few moments to register your students: Click here to register. Please feel free to share this link (https://tufts.qualtrics.com/SE/?SID=SV_7ajvw7TvOEVjg0Z) with anyone who might be interested in joining us! We look forward to another wonderful year and can’t wait to see you all!

Chinese Music on the Radio

What a delight to be able to turn on the radio in Maine and hear the sound of Chinese music — from ancient to contemporary, from traditional to modern, from folk to rock. CAFAM’s Connie Zhu has been hosting a new Chinese music program called “Ba Yin Box” on WMPG community radio since June 27 this year, 10:30-noon, every Monday. You may listen to it on 90.9 FM or stream the live show and recent shows on WMPG.org.

Because CAFAM’s mission includes promoting Chinese culture in Maine, we are pleased to be an underwriter of Ba Yin Box. We will also be publicizing our events to the public via WMPG as part of our relationship with the station. So stay tuned!

CAFAM recently placed another in what it hopes to be a series of historic markers on the site of one of Portland’s earliest Chinese-owned tea and grocery stores. That store, W.C. Tang Co., was located at 86 Portland Street between 1912 and 1917. 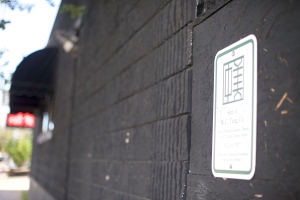 The original building at that site was destroyed by a fire decades ago and was replaced by what is now Bubba’s Sulky Lounge. Robert “Bubba” Larkin, the owner, is an avid history buff and antique collector. He was pleased to allow CAFAM to place the marker on his building.

W.C. Tang Co. was not Portland’s first Chinese-owned store; that honor goes to Ah Foo Fong, who originally came to Portland in 1868 to sell tea as an employee of George C. Shaw at his Exchange Street store. Mr. Fong opened his store, called the “New Chinaman’s Tea Store,” at 333 Congress Street in 1871.

Ar Tee Lam was Portland’s next Chinese merchant. From 1873 to 1879, Mr. Lam, who was then a cigar maker, owned a tobacconist store at 113 Federal Street. In 1880, he opened Maine’s first Chinese restaurant at 1 Custom House Wharf.

Wong G. Toy, a Portland laundryman, expanded into retail sales in 1896 when he placed an advertisement in the Portland Cadets’ program stating that he sold Chinese and Japanese goods, silk handkerchiefs and teas at his 644 Congress Street shop, called the Wong G. Toy & Co. Laundry.

It was more than a decade before Portland had another Chinese-owned store when W.C. Tang Co. opened. The Portland police raided W.C. Tang Co. in April, 1912, and arrested 26 Chinese men who were gambling in the cellar. The police also confiscated a large quantity of illegal liquor there during that raid.

Take a quick moment to renew your CAFAM membership. As a nonprofit, we rely on member support to continue as an organization.

We’ve made it easy with our new online renewal system. Just click RENEW CAFAM MEMBERSHIP to pay your dues electronically, using PayPal. We have been trying to set September as the start and end of an annual membership. Yes, it’s September right now! Please act now and renew your CAFAM membership today!

For more information about membership and dues, click MEMBERSHIP INFO. Anyone who is interested in supporting our organization’s efforts to promote and support Chinese culture and language in Maine is welcome to click DONATE TO CAFAM. We thank you for any amount of support!

If you prefer not to renew online, please mail your payment to the address below. Chinese and American Friendship Association of Maine P.O. Box 10372, Portland, ME 04101

The Maine Chinese Language Conference is dedicated to promoting Chinese language, education, and culture in Maine/USA and exchange between Maine/USA and China in education.

The conference is presented by the Chinese Language and Culture Center of Maine, Maine Confucius Classroom, and Bangor Chinese School in collaboration with the Maine Department of Education, the University of Maine, the City of Bangor, and Husson University. It is sponsored by Hanban, the Consulate General of People’s Republic China in New York, Lee Academy, Washington Academy and other local schools.

For more information about the conference, please visit our website: www.bangorchinese.com/.

CAFAM will soon be hosting a series of talks featuring topics relating to Chinese culture, history, society and more. These talks will be held in and around Portland and will showcase the many interesting people we have in our region who have expertise in China or Chinese people. CAFAM members and the general public will be welcome to attend, and we hope to find venues where Chinese refreshments will accompany the lectures.

Thank you to CAFAM vice president Jordan Foley for initiating and organizing the lecture series.

It’s almost time to crow about the Year of the Rooster! Save the date for our annual Chinese New Year celebration—we’ll be offering some new features, including authentic food, interactive activities, cultural performances and more.

The moon was as bright as can be for our annual Moon Festival celebration at Woodfords Congregational Church in Portland. Friends and newcomers enjoyed an abundant potluck dinner, entertainment, crafts and mooncakes. Each year, the event seems to get bigger and better. Thank you to the Confucius Institute for partnering with us for this special holiday! 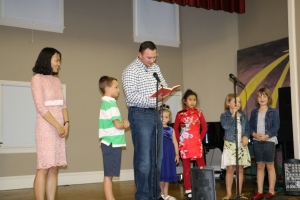 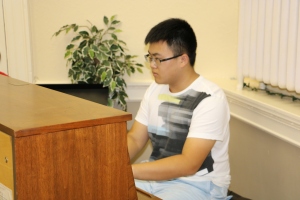 a Shanghai Road. Rob was on Maine Public Radio’s program “Maine Calling” on July 20 to talk about his experiences in China, where he was joined by CAFAM’s Connie Zhu, who added perspective on growing up in Shanghai, and by Christopher Heurlin, Assistant Professor of Asian Studies and Government at Bowdoin College. (Click here to listen to the show.)

CAFAM helped to host Rob Schmitz’s subsequent talk at Longfellow Books in Portland. It was well attended by CAFAM members and others, and Rob’s stories about life in China were fascinating. We recommend reading his book for more about his insights on the people and issues in modern Shanghai.

Summer Potluck in the Park

Sunshine greeted the many CAFAM friends who came to Winslow Park in Freeport for a picnic gathering on June 25—with more than enough food! It was a great turnout.

During the picnic, CAFAM board members voted on new officers. Our new president is Martin Connelly, joined by vice president Jordan Foley, secretary Michael Connelly, and treasurer Gary Libby. Thank you to the officers for being willing to serve our organization! And many, many thanks to Kwok Yeung, our outgoing president, who was incredibly dedicated, organized and effective at leading our organization. 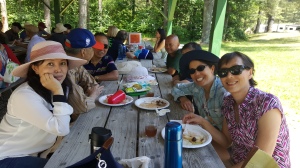 Martin Connelly has been a member of CAFAM since the mid-1990s. On his first trip to China, Martin was, as his parents will attest, sullen and unexcited by the adventure afforded him. But through his later youth and his younger adulthood, Martin developed a deep appreciation for the people, the culture and the food of his second home.

Martin studied Chinese culture and society at Colby College, and later worked in the country teaching English, writing features, and editing the news for CCTV9 — the first-ever second-generation English language copy editor at that station.

Since his return to Maine in 2012, Martin has been re-working an old Maine standby, plying the China trade. He and his family founded the Little Red Cup Tea company to bring Chinese tea (and joy) to the United States, and the venture has grown steadily since.

Martin has served on the board as fill-in secretary for the last four years. He was elected as CAFAM’s new president at the annual summer potluck gathering in June.

A Satire on Mixing English and Chinese

In case you have missed the latest Chinese cyber phenom Papi Jiang (Papi酱), hailed as 第一网红 (dì yī wǎng hóng, No. One Net Star), read this New York Times profile of the talented comedian (English version/Chinese version/bilingual version) and watch her first viral video clip (below), a satire of how certain people like to mix in English phrases when speaking Chinese. Hilarious!

According to Jiang Yilei 姜逸磊 (her real name), a graduate of China’s Central Academy of Drama and now worth over $1 million, there are eight popular practices of mixing English and Chinese in speech (pretension alert!):

#1 Repeat the key words in what you just said in English. (那两只小猫好可爱, so cute!)

This e-newsletter is provided to CAFAM members and is edited by Cindy Han and Connie Zhu, with technical support from Jay Collier. If you have any questions, comments or material for the newsletter, please send them to: cindyhan09 at gmail.com or connie at ch-trans.com.