The traditions of Chinese dance and modern Taiwanese dance were on display at a special event hosted by CAFAM in August. The event was held at Luther Bonney Hall at the University of Southern Maine’s Portland campus.

Two dancers from Taiwan were touring Maine to share their talents and knowledge. Their tour was coordinated by professional dancer and choreographer Casey Avaunt, who is from Maine and had lived in Taiwan for several years to learn about its contemporary dance culture. Casey detailed some of the history and characteristics of modern dance in Taiwan, which was pioneered by Cloud Gate Dance Theater 雲門舞集. Then, dancers Hsiu-Ju Yang and Hsin-Yi Hsueh demonstrated for the audience. Hsiu-Ju’s dance style is fluid and soft-edged, while Hsin-Yi’s incorporates athletic martial arts movements.

Audience members were invited to participate by trying some of the dance moves. Participants of all ages successfully learned a series of moves, including some influenced by Chinese opera traditions. Bravo to those who tried something new!

Thank you to Casey Avaunt for reaching out to CAFAM to host these two brilliant dancers during their tour of Maine. Casey facilitated this and other dance workshops in order to bridge the Maine community to Chinese and Taiwanese culture. 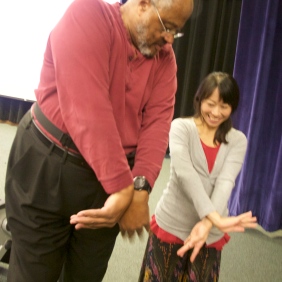 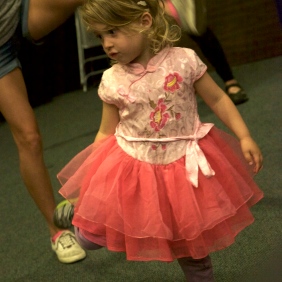 In collaboration with Space Gallery in Portland, CAFAM sponsored a July screening of the documentary film Abacus: Small Enough to Fail. This fascinating film focused on the Sung family of New York’s Chinatown, whose bank, Abacus, became the only U.S. bank to face criminal charges in the wake of the 2008 financial crisis. It is a David and Goliath tale made more compelling by the grit and intelligence of the entire Sung family – two parents and four daughters – in fighting the charges.

Summer Potluck in the Park

We had a festive group gathering at Winslow Park in Freeport for our annual June picnic. In recent years, there has been a steady influx of new residents in Maine who have ties to Chinese language and culture. It was great to see some of these new faces at the park joining with many long-time members for a fantastic potluck, conversation, and enjoyment of the surrounding park—including kite-flying! 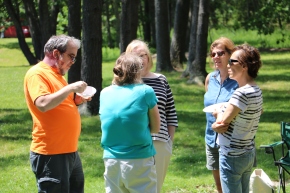 Friends of Congress Square Park will host an event to celebrate calligraphy styles and traditions from around the world. Calligraphers from many countries, including China, will demonstrate their skills, inviting people to try the different styles.

Our annual Mid-Autumn Moon Festival 中秋節 brings CAFAM members and others in the community together for an evening of food, music, poetry and mooncakes 月餅. Note that this is a new location: It’s the Woodfords Club, across the street from the Woodfords Church where we’ve held the celebration in past years. Please join us in marking this Chinese holiday!

A casual meeting of Mandarin speakers in the Portland area. Native speakers and language learners of all levels are welcome. Feel free to bring your lunch! 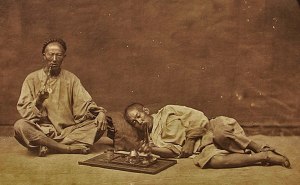 Earlier this year, a Portland bar owner made the unfortunate decision to name his bar “Opium,” a choice of such poor taste that it prompted immediate outcry from the public—including CAFAM. The bar is a newly reopened section of the high-end Indonesian-inspired restaurant Tempo Dulu at the Danforth Inn.

When it was announced in May that the bar was to be named Opium, reporters reached CAFAM for comment, given the history of opium in shaping China. CAFAM president Martin Connelly was quoted in the Portland Press Herald as saying that the bar’s name was an “inappropriate and disturbing” choice. “Opium ushered in a very dark period in Chinese history and brought mass suffering to the people of China for well over two centuries. CAFAM is alarmed to hear that anyone would consider opium to have positive connotations or to romanticize its role in Chinese society.

“With our current opioid crisis here in Maine, it is a horrible idea to celebrate this drug by naming a bar after it. Would you name a bar Heroin or Cocaine?” said Connelly. Others in the greater Portland community were also quoted, citing the insensitivity of promoting opium while Mainers across the state are dying from opioid addiction.

Even more alarming is the owners’ defense of the name of the bar, and their refusal to change it. Co-owner Raymond Brunyanszki wrote this comment in a Facebook post: The bar will “look more like a Shanghai opium den of the ’20s – dark, very sexy, and somewhat secretive.”

CAFAM board members discussed various ways of protesting the bar’s name, from joining with planned street protests to writing letters to encourage a boycott of the bar. CAFAM ultimately concluded that even negative publicity could generate interest in the bar. In the end, CAFAM encouraged individuals to write to the bar’s owner and did not join in public displays of opposition. We continue to encourage all who stand with CAFAM against the glamorization of opioid use will not patronize the bar or its adjoining restaurant and inn.

An article authored by CAFAM treasurer Gary Libby will be published by the Chinese Historical Society of America in its 2017 issue of Chinese America: History & Perspectives. The article is titled “Marriage and Family Life Among Maine’s Early Chinese Residents.” Gary describes some of the content: 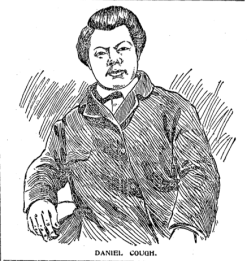 The article begins with the tumultuous story of the marriage, children, and marital discord of Daniel Cough, Maine’s earliest known Chinese immigrant (see illustration). Outside groups claimed that he had kept his wife, a local white woman, as a virtual prisoner in their home for 25 of the 27 years of their marriage. That claim caused one of Daniel’s sons to assault him, and his wife to file a divorce complaint against him. She died just before the divorce trial was scheduled to have begun.
The article then looks at Chinese men who were able to bring their wives and children to Maine from China even though Chinese common laborers, like laundrymen, were prohibited to do so by the 1882 Chinese Exclusion Act. There were also several Chinese men who married local non-Chinese Maine women and raised families here. There was even a Chinese baby boom in Maine following WWII.

Welcome to some of our new CAFAM Board members!

—Thank you to Kwok Yeung for the writeups and photos featured in this section. 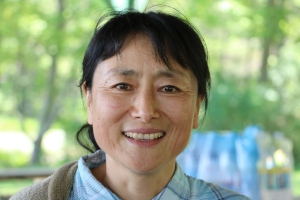 CAFAM is fortunate to have two new board members who are married to each other and who both have impressive backgrounds. Jingping Xie is from Anshan, Liaoning Province. Anshan, situated in northeastern China, is well-known for its steel production. Jingping was trained as a pediatrician and also has a master’s degree in microbiology and immunology. She says that she prefers scientific research to clinical practice. Prior to settling in Maine with her husband, Gavin Welch, she worked in research facilities in Beijing, Birmingham, Ala., and Ann Arbor, Mich. Jingping is now a research scientist at Beacon Analytical Systems, a biotechnology company located in Saco, where she develops tests for environmental and food contaminants. Jingping’s son Jingxiao (David) Liu is currently living in Hong Kong and working for a securities firm there.

Gavin Welch was born in Ohio and grew up near Albany, N.Y. Gavin received his Ph.D. in epidemiology 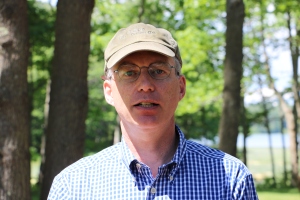 from University of Michigan in Ann Arbor, where he and Jingping were married. Before finding his way back to the Northeast to work at the Foundation for Blood Research in Scarborough, Gavin taught at Eastern Virginia Medical School. He currently works in the Quality and Safety Department at Maine Medical Center.

“We’ve been attending CAFAM events for many years,” says Gavin. “We’re very happy to have the opportunity to be more involved with the organization.”

In early spring, Gavin and Jingping tap maple trees to make maple syrup. They have fun boiling down the sap and enjoying the flavorful syrup with other foods. They both love the outdoors and enjoy cross-country skiing together in the winter and hiking in the summer. Jingping’s other hobbies include gardening and swimming, while Gavin takes to reading, especially Sunday newspapers, home repair, and woodworking.

Gavin says he fell in love with Maine after his undergraduate studies at University of Maine, Orono. The couple now lives in Cape Elizabeth.

Cynthia Setchell has resigned from her longtime service as a CAFAM board member due to her recent move from Maine to Massachusetts. CAFAM is grateful for her contributions over the years and wishes her all the best! 感谢！感謝！

This e-newsletter is provided to CAFAM members and is edited by Cindy Han, Connie Zhu and Ophelia Hu Kinney, with technical support from Jay Collier. If you have any questions, comments or material for the newsletter, please send them to: cindyhan09 at gmail.com or czhu at benchmarkmaine.com.